Peculiarities of the methodical work of Ukrainian schools abroad

The main factors of emergence of Ukrainian education outside of Ukraine were delineated in the article. The main reasons of migration of Ukrainian population have been substantiated by the author. It was determined that the reforming of the national education system and its development is the basis for intellectual, spiritual and cultural development of Ukrainian society, its exit into the international arena of world relationships.

The attention was focused on the fact that one of the methods for dissemination of national idea of Ukrainian ethnic of abroad countries primary role belongs to the education.

The successive stages of the development of Ukrainian education abroad were singled out by the author. It has been determined the main factors for the preservation of ethnic identity in a foreign environment. Peculiarities of schooling formation in the countries of settlement of Ukrainian communities that caused diversity of forms for manifestation of Ukrainian education abroad have been clarified. The organizational and methodological structure of educational institutions of Diaspora was represented in this article.

Detailed characteristics of Ukrainian educational institutions of abroad countries showed that native schools, «translucent» associations since their emergence in the West Ukrainian settlements were not only centers of education, but were significant cultural and educational activities among their countrymen, and in foreign environment.

It has been proved that Ukrainian schooling of abroad countries is a component of Ukrainian pedagogy, an important factor in the preservation of Ukrainian national identity.

Natsionalna doktryna rozvytku osvity Ukrainy u XXI stolitti: Ukaz Prezydenta Ukrainy (National Doctrine of Education of Ukraine in the XXI century), the Decree of the President of Ukraine), no. 347/2002 from 17.04.02, available at: http://osvita.ua/legislation/other/2827/. (access date: 09.09.2015). [in Ukrainian]

Pro zatverdzhennia Kontseptsii natsionalnoho vykhovannia studentskoi molodi (On approval of the Concept of national education of student young people), the decision of the College of Education of Ukraine from 25.06.09, protocol no. 7/2-4, available at: http://osvita.ua/legislation/Vishya_osvita/4310/. (access date: 12.09.2015). [in Ukrainian] 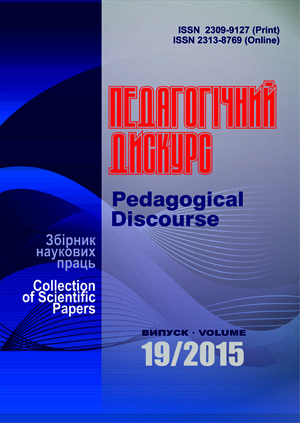