Analysis of the Factors and Indices, Influencing the Development of Modern Children and Their Stratification by Categories

The urgent problem of stratification of modern children according to various categories has been revealed in the article. Different approaches to solving of this issue have been analyzed. The theory of generations, which has direct relation to the express-analysis of the factors influencing the development of modern children and stratification of them according to the categories, has been examined. Within the analyzed concept, special attention has been paid to six generations: «The G. I. Generation», «The Silent Generation», «The Boom Generation», «Generation X», «The Millennial Generation», «The Homeland Generation» and the importance of these generations has been mentioned. The terms «children indigo» and «crystal children» have been characterized. On the basis of texts analysis (in most cases – these were the Internet articles without authorship) the absence of any scientific theory has been proved. Unfortunately, in most cases the authors formed their aspiration for the idea of Messianism like the one, which has undisguised occult form, or «playing science», using even passionate theory of ethnogeny of L. M. Humiliov. Biological characteristics of children are fictions, which are of pseudoscientific character. The preconditions of spreading of such theories in post-Soviet space and the methods of their introduction into everyday consciousness have been revealed. The main idea of the authors of the book «Children Indigo» is that many children, who suffer from the syndrome of attention deficit or syndrome of attention deficit with hyperactivity (SADH) are in fact – new kind of the humanity’s evolution. The adherents of the theory forget that the characteristics of a child, which deal with the deviations in psychic development and behavior, are described in science. Different approaches to stratification of modern children have been analyzed. In the basis of the comparison were the results of the research, conducted by the psychologist D. Y. Feldshtein. The conclusion was made that the theory about «children indigo» is pseudoscientific, the goal of which is commercialization and advertising. Any pseudoscientific stratification (division) of children is dangerous. 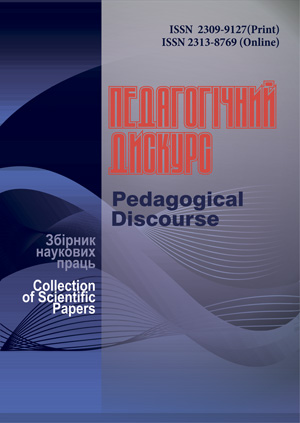 Published
2016-04-12
How to Cite
Krutii, K., & Zdanevych, L. (2016). Analysis of the Factors and Indices, Influencing the Development of Modern Children and Their Stratification by Categories. Pedagogical Discourse, (20), 115-122. Retrieved from http://ojs.kgpa.km.ua/index.php/peddiscourse/article/view/53
Download Citation
Issue
No 20 (2016): Pedagogical Discourse
Section
Articles

Most read articles by the same author(s)